The 1971 Project is a labour of love and a promise to stay close to the heart of this genius music. It is a project co-devised with the musician Chris Winslet and has been performed since 2012.
The 1971 Project concert is from a very specific time and encapsulates the important transition of popular American music going into the 1970s – it comprises our re-workings of 20 songs taken from four seminal albums from that period – Joni Mitchell’s “Blue”, Neil Young’s “Harvest”, Carole King’s “Tapestry and James Taylor’s “Mud Slide Slim”. All of these four albums were produced by singer/songwriters whose music epitomised the mood of that time, and who are still regarded as icons today. Their music is constantly referenced still and they set a standard for future generations.
The new arrangements weave together jazz, folk and the early seventies pop sound and yet remain faithful to the spirit of the originals. The songs are performed by a five piece band – Rebecca is on lead vocals, piano, accordion and melodica; Chris Winslet on various guitars, 5 string banjo and Appalachian dulcimer; Tony Woods on saxes, clarinet and flute; Nick Rye on drums, percussion and piano; Diane McGuire on electric and acoustic bass. We feel that using a wide array of instruments is not only an exciting way to perform these songs but also very interesting for the audience.
In addition to the music Rebecca provides a context with anecdotes and information about the recordings and the times in which they came to exist. 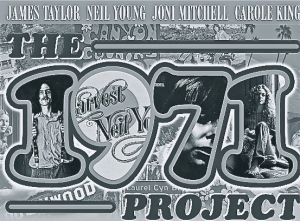